Showing posts from June, 2014
Show all

Marriage and Violence Against Women

From the article:
The bottom line is this: Married women are notably safer than their unmarried peers, and girls raised in a home with their married father are markedly less likely to be abused or assaulted than children living without their own father.
But also from the article: ...married men can and do abuse or assault their wives or daughters. Marriage is no panacea when it comes to male violence. But married fathers are much less likely to resort to violence than men who are not tied by marriage or biology to a female.

There has been an outcry about the recklessness of linking safety with being married, specifically on Slate, with an article stating  "Marriage Will Not Save Women From Male Violence."

#YesAllWomen and What It All Means 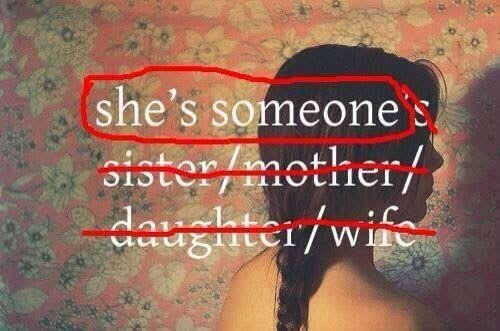 Recently, in light of crimes committed in California against women who were perceived to slight an individual, people have started posting under the heading/hashtag YesAllWomen, stating that no, not all men rape, or beat, or harm women, but all women have, at some point, experienced harassment, abuse, or discrimination in their lives.  Below are just a few examples; I strongly encourage you to search #YesAllWomen on Twitter or Tumblr to learn more.

Many argue that social media campaigns like this don't do anything.  It's just another case of people saying one things behind a computer keyboard/smartphone and another in real life.  Well, I would argue that these days, social media IS real life.  And if people are talking about misogyny, and rape culture, and discrimination, even if it isn't solving the problem, talking about it is a step in the right direction.  It is hard to read the information posted under this heading on Twitter and Tumblr, but I do it to remember why Tr…
Post a Comment
Read more

By Katy - June 02, 2014
In our efforts to include, empower, and serve all people, we share in the joy that President Obama has proclaimed June to be Lesbian, Gay, Bisexual, and Transgender Pride Month.

Presidential Proclamation -- Lesbian, Gay, Bisexual, and Transgender Pride Month, 2014LESBIAN, GAY, BISEXUAL, AND TRANSGENDER PRIDE MONTH, 2014 - - - - - - - BY THE PRESIDENT OF THE UNITED STATES OF AMERICA A PROCLAMATION As progress spreads from State to State, as justice is delivered in the courtroom, and as more of our fellow Americans are treated with dignity and respect -- our Nation becomes not only more accepting, but more equal as well. During Lesbian, Gay, Bisexual, and Transgender (LGBT) Pride Month, we celebrate victories that have affirmed freedom and fairness, and we recommit ourselves to completing the work that remains. Last year, supporters of equality celebrated the Supreme Court's decision to strike down a key provision of the Defense of Marriage Act, a ruling which, at long last, gave loving, …
Post a Comment
Read more
More posts