Showing posts from February, 2015
Show all

By Heather O. - February 27, 2015
As a parent of two children, one boy and one girl, I perhaps was not as vigilant as I should have been in controlling their access to video games and movies that had “adult content.”  I breathe a sigh of relief that I do not have to raise them in today’s environment.    I still remember no longer allowing my son to watch professional wrestling on television.  He used to love to physically wrestle with his stuffed power ranger, and I thought it was cute.  Then, the news of the death of one child by another resulting from a choke hold that the child saw on TV’s “Wrestlemania,” caused me to end my son’s growing preoccupation with professional wrestling.  He took it well and found another way to pass his time.  I always controlled the games he could play on his Playstation I then Playstation II, and he seemed fine with being limited to sports only video games.  My son was told why and also knew that he should not be shooting weapons while playing video games.  I could not control what gam
1 comment
Read more 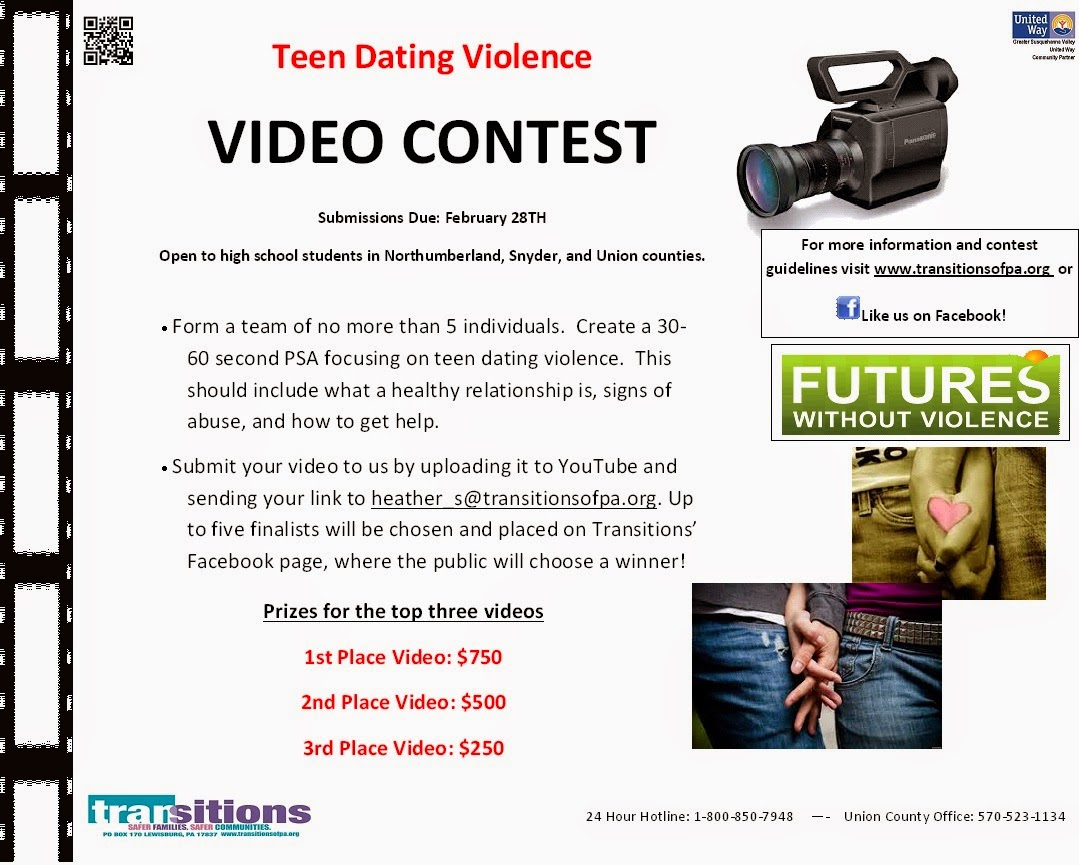 Transitions is pleased to announce the 2 nd Annual Teen Dating Violence Video Contest.  High school students attending schools in Northumberland, Snyder, and Union Counties are eligible to enter by creating a brief public service announcement focused on teen dating violence.  The entrants with the top three videos will win cash prizes. Entering the contest is easy. From February 1 st through February 28 th 2015 students can create a 30-60 second video focusing on dating violence; this may include what a healthy relationship is, the signs of abuse, and how to get help.  Participants should upload their videos to YouTube and send their links to heather_s@transitionsofpa.org. After the submission deadline, staff members at Transitions will choose up to five finalists.  These videos will then be placed on Transitions’ Facebook page for the public to decide the winner by the number of “likes” each video receives.  Your team will be notified if your video is one of the five finalis
Post a Comment
Read more
More posts