Showing posts from September, 2012
Show all

Bully Screening at The Campus Theatre 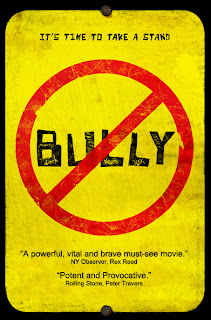 We are pleased to annouce that the film BULLY will be shown at the Campus Theatre  in Lewisburg.  This event is sponsored by Unitarian Universalist Congregation of Susquehanna Valley .  The film will be showing Friday, Sept. 21st at 8:30pm, Saturday, Sept. 22nd at 8:00pm, Sunday, Sept. 23rd at 2:00 and 5:30 pm.  "Over 13 million American kids will be bullied this year, making it the most common form of violence experienced by young people in the nation. The new documentary film BULLY, directed by Sundance and Emmy-award winning filmmaker, Lee Hirsch, brings human scale to this startling statistic, offering an intimate, unflinching look at how bullying has touched five kids and their families." (from  http://thebullyproject.com/indexflash.html#/story ) You may remember in late February, there was outcry when this film received a NC-17 rating, then it was downgraded to R, and currently has a PG-13 rating .  Critics were upset because part of the intended a
Post a Comment
Read more 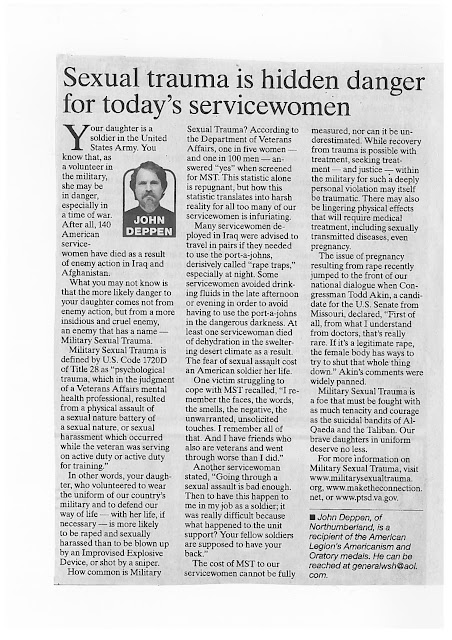 Thank you to John Deppen , who took the opportunity to address Military Sexual Trauma in his column in The Daily Item this Sunday.  His column typically covers Civil War, history, reenactment information, and other Veterans' causes.  Our sincerest gratitude goes to John Deppen, who took the opportunity to cover an unpopular topic.  If you cannot read the above, please see the text of the column below. Sexual trauma is hidden danger for today's servicewomen Your daughter is a soldier in the United States Army.  You know that, as a volunteer in the military, she may be in danger, especially in a time of war.  After all, 140 American service-women have died as a result of enemy action in Iraq and Afghanistan.  What you may not know is that the more likely danger to your daughter comes not from enemy action, but from a more indifious and cruel enemy, an enemy that has a name--Military Sexual Trauma. Military Sexual Trauma is defined by U.S. Code 1720D of Title 28 as "
Post a Comment
Read more
More posts