Showing posts from July, 2018
Show all

By Heather O. - July 25, 2018
Navigating life is hard enough especially when you are doing so after moving on from an abusive relationship.  Often a survivor finds that the very last hold an abuser can claim is that of the bonds of matrimony.  Although divorce law has remained relatively true to the protection of property interests first, we have seen some evolution in the minimal requirements to break those marital ties when property is not at issue.  The two most often used grounds for divorce are the consensual divorce, where both parties agree to the dissolution of the marriage, and the separate and apart claim where both parties have lived their lives separated for a substantial period of time.  Both of these options come with caveats that often hinder a smooth transition into total freedom when one party refuses to agree just to be spiteful. Recently, an entirely new section was added to the divorce code which has proven to be uniquely essential to our clientele.  Section 3301(c)(2) of the divorce code w
Post a Comment
Read more 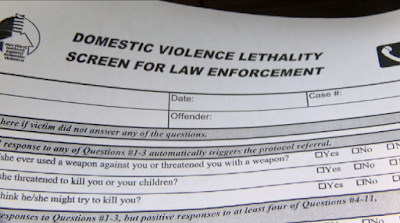 The Bureau of Justice Statistics estimates that 3 women are killed by a current or former intimate partner every day. During the wars in Iraq and Afghanistan (2001-2012), 6.488 American soldiers were killed. During that same time, 11,766 women were murdered by a current or former male partner. Since 2008, more than 100 people lost their lives as a result of domestic violence each year. Domestic violence is deadly – not just for those who are being abused. In fact, domestic calls are some of the most dangerous for law enforcement. A study by the National Law Enforcement Memorial Fund found that 22% of officer deaths that occur in the line of duty happen while responding to domestic violence calls. Those statistics are difficult to understand. With all we know about intimate partner violence, why can’t we stop these killings? Through the Lethality Assessment Program (LAP), the Pennsylvania Coalition Against Domestic Violence is hoping to do just that.  In 2012, PCADV began to i
Post a Comment
Read more 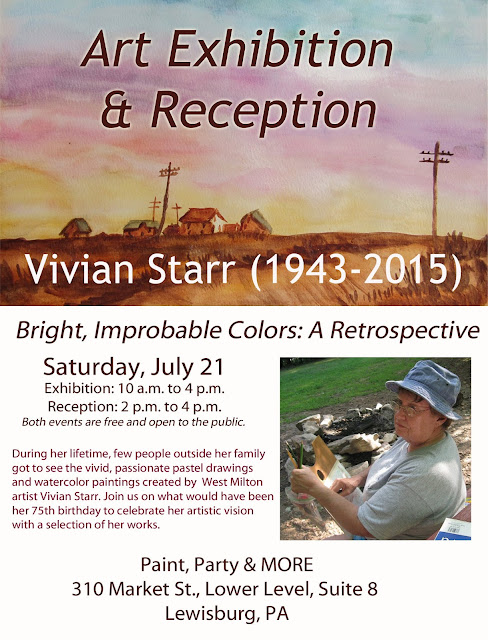 West Milton artist and Transitions Sexual Assault Counselor, Vivian Starr, created over 400 works throughout her life, primarily pastels and, in later years, watercolors. Only her family and close friends, however, saw more than the occasional quick sketch. On what would have been her 75th birthday, this retrospective show will celebrate Vivian Starr's artistic vision through a selection of her vivid, passionate works.
Post a Comment
Read more

Have you ever had to walk into a courtroom, get onto the witness stand, swear to tell the truth, and then sit down and tell a judge or jury details about something bad that happened to you?  Was it a scary experience? Sure it was!  Now imagine having to go through that as a young child. Most people who have ever had to live through such an experience will tell you that it was one of the most nerve-wracking experiences of their lives.  Child abuse victims are often frightened and intimidated if they have to testify about their experience in front of a judge or jury. Fortunately, many jurisdictions now have the assistance of what is a growing practice in courthouses across the U.S. – the use of a “comfort dog.”   While most of us think of the term “working dogs” as service animals for the disabled, police dogs, or military working dogs, dogs can also be trained to be “courthouse” or “comfort” dogs. These canines aid in the investigation of crimes involving young or vuln
Post a Comment
Read more

By Heather O. - July 06, 2018
The end of June signaled the end of Pride Month; however, we want the community to know we welcome and support victims in the LGBTQ+ community all year round. Pride Month celebrations started to commemorate the riots that broke out as a result of a police raid at the Stonewall Inn, targeting the LGBTQ+ community. Two trans women of color, Marsha P. Johnson and Sylvia Rivera, are most notable for resisting the police on that day in 1969. From there, celebrating these protests became a yearly event, which has evolved into what Pride Month is today. Pride parades, marches, and celebrations are held all month long, throughout the country, to remember those who have fought for the progress that has been made and the rights and protections that the community is still fighting for. It has also become a time for those in the community to celebrate proudly who they are. ( https://sites.psu.edu/womeninhistory/2016/10/23/the-unsung-heroines-of-stonewall-marsha-p-johnson-and-sylvia-rivera/ )
Post a Comment
Read more
More posts